This is the post you have all been waiting for. It’s the post I’ve been yearning to write. Not only is it my 90th post, but it’s also one of the most exciting posts there is. There is no Future Hamster. There is THE PRESENT HAMSTER! Today, I will be sharing some updates, introducing the new hamster, and retelling his origin story.

Why Did It Take So Long?

After having my first hamster, Beanie, I knew I wanted to own more hamsters and continue to share my knowledge and experience with you on this blog. I had seen Victoria Raechel’s huge hamster cage, and wanted to build a similar version for the future hamster. However, the price of wood doubled while I was sorting out some things, and I could not bring myself to spend $100 on a sheet of wood. Since I have no idea when the price of wood will go down, I decided to temporarily (possibly permanently) use Beanie’s bin cage for The Future Hamster.

I also wanted to use safe organic soil for my primary substrate, and to have a sand bath, so I purchased the required soil and sand. In my spare time I’ve also been creating unseen DIYs, which I will have tutorials for in the future. So, I had everything I needed for The Future Hamster.

I set up the cage, and was ready. But I had a dilemma: I had been searching buy’n’sell websites and shelters for months, but hadn’t (still haven’t) seen any hamsters for adoption in my area. If you’ve read my post on hamster adoption, you know why I’m not keen on purchasing pet shop hamsters. I was pushed to make a decision: if I wanted a hamster, I would have to purchase one from a local shop. It was a difficult thing to do, but I did purchase my hamster from a pet shop with ethically sized and clean cages with healthy-looking animals all around.

So after exactly 6 months without a hamster, on May 27th, 2021, I brought home my second hamster. 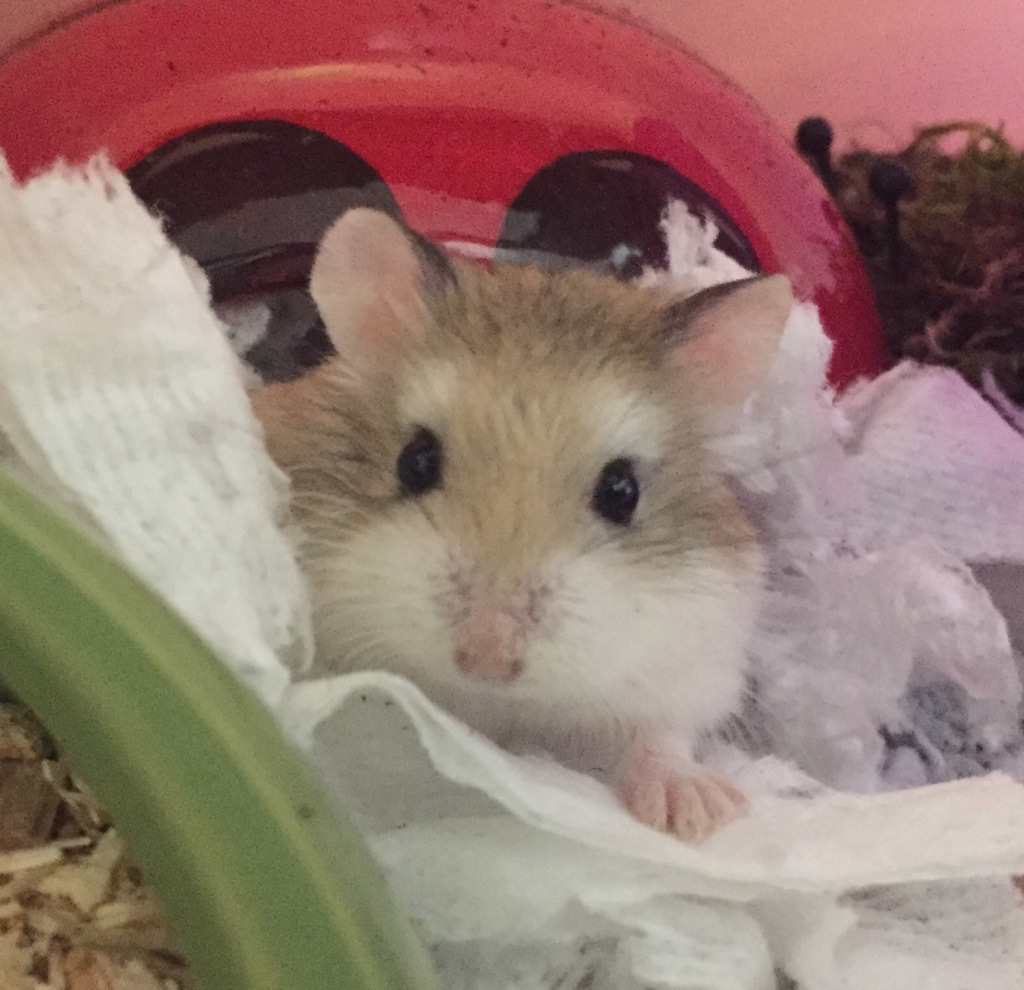 I have estimated Stuart’s about two months old, so we’ll be celebrating his birthdays on March 27th.

Stuart is named after Stuart Scola, a character from the TV show ‘FBI.’ He has many cute nicknames already, such as Stew (like the food), Stewy, Stew-baca, Stew-preme, Stew-Man (does whatever a Stew can), Stew-Boi, and Super Tiny Epic Walnut (S.T.E.W.). He will be referred to as Stuart or Stew on this blog to keep things simple 🙂

Having only had him since Thursday, I still have so much to learn about his personality, but I’ll have plenty to share about him next week. I love him so much, and look forward to documenting Stew’s life and my experiences with him, and sharing them with you! I’ll also try to post photos of him often as well.

Over the next few weeks I’ll be posting mostly about Stew. I’ll be documenting his taming process, his personality, and sharing any updates about him. If you’re interested in seeing Stew’s life unfold, you can follow this blog to receive updates when the latest “Stew Story” comes out.

As with Beanie’s life story, Stuart will also have his own life documented in a similar format to Beanie, with each post dedicated to him listed as a ‘part’ of the story. I hope to create a new part or two each month, and make the part about everything he did in the time since the last part, or one major event.

And in case anyone was wondering, I am not changing the blog title to ‘Stuart the Hamster.’ I still feel that Beanie should remain the ‘title hamster,’ as she was the inspiration for this blog.

And now, I will introduce Part 1 of the Stuart Saga:

After coming to the conclusion I would get a pet shop hamster, I spent the evening of the 26th preparing for The Future Hamster.

I had already set up the cage, but I took everything out and redid the setup, ensuring to rub my scent onto everything. This helps new hamsters adjust to your presence and smell. I also sieved the sand bath, which made the sand much smoother.

I also shredded some tissue and filled my living world hamster carrier with it so the hamster could hide in the tissue.

The next day I called the shop, who confirmed they had Roborovskis in stock, and I set out to get my hamster! Although I was really happy and excited, I was also incredibly nervous! I had been planning to get a male Roborovski for some time, so I already knew what I was looking for when I entered the shop.

I requested access to the hamsters. The nearly identical little Robos scattered when the employee ripped off their hidey house, much to my dismay. I then leaned into the cage, letting the hammies sniff and run around my hand for a while.

I noticed Stuart, in particular. What made him different to me was his more curious nature, which is a very good personality trait and can make taming quicker. He also had white fur that went above his tail around under his stomach, unlike the other little hamsters. He was different, and I knew I wanted him.

After a couple attempts, I scooped him into the upturned hidey house and into my carrier, where he dug into the tissue. I wrapped the carrier in a sweater to prevent him getting chilled, and headed home with my second hamster.

That was just the first Part of Stuart’s life with me, and in the next month I will be posting Part 2: The First Days With Stuart, Part 3: Stuart’s First Week of Taming, and Part 4: Stuart’s First Cage Clean.

If you’re not interested in Stew (though I’m not sure if that’s possible), I will be resuming DIY tutorials and educational posts once the initial ‘Stuart Craze’ passes.

So make sure to like this post and follow the blog to see weekly hamster-related content, and I’ll see you on Tuesday with more small pet care, DIYs, recipes, cage setups, stories and more, have a ham-tastic day!

2 Replies to “The Future Hamster”